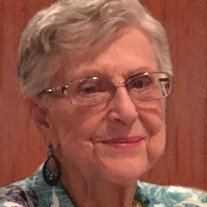 Her memorial service will be at 11:00 a.m. on Friday, January 22, 2021 at First Christian Church of Bloomington with Rev. Jim Warren and Hawkins Williams officiating. Those in attendance are asked to follow proper social distancing and mask practices. Inurnment will be in Pleasant Cemetery in Kenney, Illinois. A future celebration of life will be held on what would have been her 96th birthday, June 19, 2021.

In lieu of flowers, memorials may be made to First Christian Church of Bloomington, Home Sweet Home Missions, or Midwest Food Bank. Kibler-Brady-Ruestman Memorial Home in Bloomington is assisting the family with arrangements.

Niola was born in Kenney, on June 20, 1925, the third daughter to Elmo and Lida (Brelsfoard) Thompson. She grew up in Kenney and was surrounded by her grandparents, aunts, uncles, and cousins. In 1943, she graduated Kenney High School. She married William Daily on March 18, 1946, the same day as her grandparents 50th wedding anniversary and her parent's anniversary. In 1947, she and her husband moved to rural Danvers to farm, later in the late 70s they moved to a farm near Lake Bloomington, and then in 2006, they moved to Bloomington.

She was an active member of the Stanford Christian Church and later First Christian Church of Bloomington. Niola was a life member of BroMenn Hospital Service Auxiliary, she volunteered in the lab, which turned into a part-time job. She worked there for 20 plus years before retiring in 1999 at the age of 75.

Niola enjoyed traveling in the United States, as well as Puerto Rico, the British Isles, and Europe.

Surviving are her daughter, Jean Daily of Danvers, and several nieces and nephews. She was preceded in death by her husband in 2007 and by her daughter, DiAnn Daily in 2016.

Niola was known for wearing hats and her sense of humor, she will be missed by all who knew her.


To send flowers to the family or plant a tree in memory of Niola N. Daily, please visit our floral store.

To send flowers to the family in memory of Niola Daily, please visit our flower store.
Send a Sympathy Card