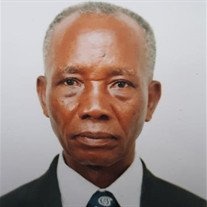 Nlambu Z. Matundu, 82, of Democratic Republic of the Congo. He passed away at 10:21 a.m. on Thursday, December 20, 2018 at the AtlantiCare Regional Medical Center in Pomona, NJ.

He was born on October 27, 1936 in Democratic Republic of the Congo a son of Philippe Nlambu and Nganda Mpezo. He married Nsansi E. Mbondo on February 8, 1960 in Matadi, Congo, she survives.

He is preceded in death by his parents; two children, Philippe Matundu and Ritha Matundu, as well as, one grandson, one brother, and two sister.
Nlambu proudly served in the Belgium Public Force for nine years, entering in 1951, serving until he joined the FAZ/Congo Army in 1960. He proudly served until 1983. He was commander of Army Logistics and oversaw Army uniform production and weapon and ammunition supply.

He spent most of his time at the Army base church, where he was a deacon, teacher of baptism and in charge of the prayer branch. He also played piano and sang in the church choir. His family will remember his sense of humor, his generosity and kindness. Mostly they will remember the love he had for his family and friends.


To send flowers to the family or plant a tree in memory of Nlambu Z. Matundu, please visit our floral store.

Please click here to view the video tribute
To send flowers to the family in memory of Nlambu Matundu, please visit our flower store.
Send a Sympathy Card