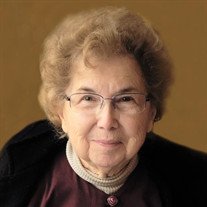 Bloomington - Norma E. Ford, 93, of Bloomington passed away at 10:15 p.m. Tuesday, March 13, 2018 at her residence.
Inurnment will be in Evergreen Memorial Cemetery in Bloomington at a later date. Cremation rites have been accorded. Memorials may be directed to OSF Hospice. Kibler-Brady-Ruestman Memorial Home in Bloomington is assisting the family with arrangements.
Norma was born on January 31, 1925 in Ohio, a daughter to Mildred Bell and Earl Guseman.
Surviving is a grandson, David (Kelly Ruiter) Ford of Normal; two brothers, James 'Jim' Guseman of NJ and Carlos 'Carl' Guseman of WA.
She was preceded in death by a son, George S. Ford and daughter-in-law, Mary S. Ford.
Norma received her Bachelors Degree from Ohio University. She worked as a chemist at Sandusky Foundry in Sandusky, Ohio.
Despite her many accomplishments and adventures she was most proud to be a mother and grandmother. She will be deeply missed.

To send flowers to the family or plant a tree in memory of Norma E. Ford, please visit our floral store.

To send flowers to the family in memory of Norma Ford, please visit our flower store.