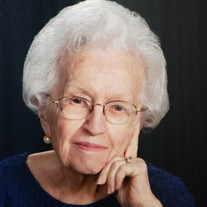 Olga was born December 7, 1921 in King Township in the Wareham farmhouse in rural Christian County to the late Ethel and Clarence Armitage. She was the youngest of five boys and three girls. One boy and one girl died during the flu epidemic in 1918 and one girl died previously to that time. Her brothers were Cecil,Marion, Fredrick and Olin, all of which preceded her in death.

Olga graduated from Taylorville Township High School with classes emphasizing business courses including shorthand and typing. These skills were put to use when she worked for Carthage College, the located in Carthage, then later at the Central Illinois Methodist Conference Office and subsequently at Illinois Wesleyan University in Bloomington where she enjoyed working in the Financial Aid office and retired in 1986. She worked as a school teacher during World War II in a one room school house in Adams County.

Olga was a member and Past Worthy Matron of both Empire Chapter, LeRoy and Felicity Chapter, Normal, Order of Eastern Star. She was a member and past president of the Illinois Women's Business Association, United Methodist Women,Bloomington/Normal Federated Women's Club, Illinois Wesleyan Alumni Association,Retired Ministers Association, American Passion Play door staff and ushered at the Bloomington Center For the Performing Arts. She enjoyed busing with donuts to Illinois Wesleyan basketball games and dining out with her Retired Old Methodists Eating Out Group.

Condolences and memories may be shared with Olga's family at kiblerbradyruestman.com

To send flowers to the family or plant a tree in memory of Olga Darline Young, please visit our floral store.

To send flowers to the family in memory of Olga Young, please visit our flower store.
Send a Sympathy Card