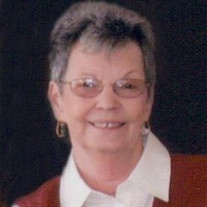 Her Funeral Service will be at 10:00 a.m. on Saturday, September 3, 2016 at Kibler-Brady-Ruestman Memorial Home in Bloomington with Fr. Joseph Baker officiating. Visitation will be from 4-7:00 p.m. on Friday, September 2 at the memorial home.

In lieu of flowers, memorials may be made to Advocate Charitable Foundation, 3075 Highland Parkway, Suite 600, Downers Grove, IL 60515 attention: Mother and Baby Fund or Advocate Hospice.

She was born on September 24, 1936 in Atlanta, Illinois, the daughter of James and Elizabeth Kindred Fones.  She married Thomas L. Fay on October 9, 1954 in Atlanta, Illinois. They were married 61 years, celebrating their fortieth anniversary at a reception in Lafayette and their 50th in Bloomington at a luncheon at the Jumer Hotel.

She was preceded in death by her parents; sister, Catherine Anderson; and brother, Johnny James Fones.

Patty was a graduate of Atlanta High School where she was a Varsity Cheerleader for three years.

A long time resident of Lafayette, Indiana, Mrs. Fay was an accomplished Fire Company Claims Adjuster for State Farm Insurance for 21 years and retired in 1991. She often served as a Catastrophe Claims Adjuster notably helping victims of the Morton Thiokol explosion, Hurricane Andrew, and several smaller storms and disasters.

Patty loved spending the winters in warm climates near casinos.  She enjoyed video poker and could spend many fun filled, uninterrupted hours.  Her summers were spent cheering and cursing the Chicago Cubs. She proudly flew the 'W' flag after every victory to the amusement and benefit of her appreciative neighbors - except the Cardinal fans. Her favorite flower was the Purple Bearded Iris and she loved watching the birds at her feeders.

An accomplished seamstress, Patty made dozens of quilts and her home was decorated with counted cross stitch art and other beautiful crafts. An avid reader, she enjoyed a wide variety of fiction. She could finish a crossword puzzle in minutes and amused all with her consistent winning answers while watching JEOPARDY!

Dear to her heart were the infants of BroMenn Medical Center where she volunteered for several years. She knitted and donated many dozens of tiny baby caps for them to wear in their first days of life receiving grateful notes of thanks.

Mrs. Fay was of Catholic faith and saying the Rosary brought her solace in her final days. She passed to Our Father peacefully in the company of her husband Tom and son Peter as The Beatles ‘Let It Be' played softly in the background.

Online condolences and memories of Patty may be left for the family at kiblerbradyruestman.com.


To send flowers to the family or plant a tree in memory of Patty J. Fay, please visit our floral store.

To send flowers to the family in memory of Patty Fay, please visit our flower store.