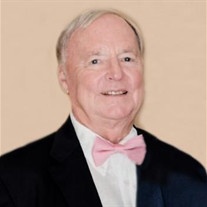 Paul Christian Ahrens 70, of Cape Coral FL, formerly of Bloomington, passed away at 4:15 p.m. on Sunday, May 19, 2019 at the Mayo Clinic Hospital in Rochester, MN.
A Celebration of Life will be from 5-7 pm on Tuesday May 28, 2019 at Kibler-Brady-Ruestman Memorial Home in Bloomington. In lieu of flowers, memorial contributions may be directed to the American Heart Association.
Paul was born on January 31, 1949 in Brooklyn, NY, son of Oscar Christian "Chris" & Olga Mae "Ollie" Ahrens of Black Mountain, NC. He married Mary Lu Haas on July 14th, 2012.
Surviving is his wife, Mary Lu Ahrens of Cape Coral FL; children Bretton (Hayley) Ahrens, Gramm Ahrens, both of Champaign, Kelly (Thad) Mool of El Paso, Kristopher (Julie) Kleen of Secor, Kimberly (Matt) Atwater of Monument CO; grandchildren, Quinton Hancock, Ella Mae Ahrens, Brady, Tristyn, Spencer Mool; brother Glen Ahrens of Delaware; cousin Cliff (Ann) Knowles.
Paul is at peace with his parents and granddaughter, Cora Joy Ahrens
Paul graduated from Earlham College in Indiana where he was a member of the varsity football team. He also did a semester in Foreign Study in Edinburgh, Scotland. He received his doctorate of Law from Vermont Law School in 1977 and was admitted to the New York Bar in 1978. Paul worked for the Legal Aid Society on Long Island and also was a case worker in the Virgin Islands where his parents were stationed at the time.
Returning to the U.S. mainland, Paul joined the New York Attorney General's office as a Assistant Attorney General under Robert Abrams. He was a law clerk for the late Justice Jacob Mishler, US District Court of the Eastern District of NY.
Paul was a corporate Attorney for State Farm Insurance Company in Bloomington, IL for 27 years before retiring in 2017. Among his many achievements, he originated the Affirmative Law Department within State Farm Insurance.
He lived in Huntington, Long Island NY before being transferred to Bloomington. He also lived many places with his parents in Bogota, Columbia, Virgin Islands, Puerto Rico and traveled extensively.
Paul was instrumental in the restoration of a historic Oyster Boat call "The Little Jennie" built by J.T. Marsh in Solomons Island, Maryland in 1884 She is listed on the national registry of Historic Places. Paul was the navigator on board with Captain William Townsend Perks in the Parade of Tall Ships Op Sail 1986 for the Centennial Celebration of the Statue of Liberty. The "Little Jennie" was the oldest sailing vessel in the event. Paul can be seen in the documentary of the restoration called "Freedom's Glory" which was aired many times on national television.
He loved sailing, power boating & fishing or doing anything around water. Paul was gifted a 1970 BSA motorcycle for graduation and drove it 16,000 miles from Scotland to Spain prior to starting his foreign study.
Paul also spoke fluent "Castilian" Spanish.
He was a loving son, husband, father, grandfather, brother, and friend and will be greatly missed.
Paul will be laid to rest at sea in the Gulf of Mexico at a later date.


To send flowers to the family or plant a tree in memory of Paul Christian Ahrens, please visit our floral store.

Please click here to view the video tribute
To send flowers to the family in memory of Paul Ahrens, please visit our flower store.