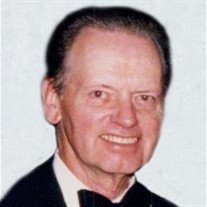 Bloomington - Philip Gardner Buffinton, 92, of Bloomington passed away at 10:55 a.m. on Thursday, August 25, 2016 at Martin Health Center in Bloomington.

A private family graveside service will be at Evergreen Memorial Cemetery in Bloomington with Fr. Jeff Windy officiating. Kibler-Brady-Ruestman Memorial Home in Bloomington is assisting the family with arrangements.

Memorials may be made to Faith In Action or Holy Trinity Catholic Church or Martin Health Center.

Philip was born on October 18, 1923 in North Adams, Massachusetts, a son to Arthur and Mary Edwards Buffinton. He married Rita Gagnier on October 22, 1945 in Williamstown, MA. She survives.

He was preceded in death by his parents and two brothers in-law.

Philip enlisted in the United States Army Air Corps in October 1942 and was called to active duty in January 1943. He graduated from pilot training school as 2nd Lt. in Frederick, OK in March 1944. He piloted B-24 bombers for the 8th Air Force, England, Second Air Division, 93rd Bomb Group and was lead pilot for 19 missions from October 1944 to May 1945. Philip was discharged September 1945.

He attended Williams College, Class of 1946 and graduated from Worcester Polytechnic Institute, Class of 1949 with a Bachelors of Science in Mechanical Engineering.

Upon graduation from WPI in 1949, he was employed by the Factory Mutual Insurance Companies as a fire protection engineer in Boston, MA. He was an engineer and risk underwriter at Manufacturers Mutual Fire Insurance Company (Allendale Insurance Co.) in Providence, RI from 1953-1955 and was a manager at Factory Mutual Rating Bureau in Providence, RI from 1956-1961. Philip was Vice President at State Farm Fire and casulty Company in Bloomington, IL from 1961-1974 and Executive Vice President and Chief Operating Officer from 1974-1987, retiring on December 31, 1987. From 1988-1992 he served as consultant to the General Reinsurance Corporation specializing in catastrophe exposures like hurricanes, tornados and earthquakes.

He was a former member of Bloomington Country Club in Bloomington, IL. He enjoyed golf, reading and woodworking. He was very dedicated to his job and his family and enjoyed working on projects in his spare time. If something was broken or didn't work right-he could fix it.

The family wishes to thank the caring staff of Martin Health Center, Dr. Sven Klauss and Advocate Hospice who provided wonderful care for Philip and his family.

Philip was deeply loved and will be greatly missed.

To send flowers to the family or plant a tree in memory of Philip Gardner Buffinton, please visit our floral store.

To send flowers to the family in memory of Philip Buffinton, please visit our flower store.