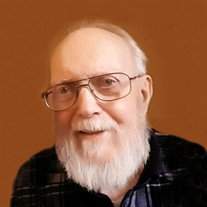 His memorial service will be held at 11:00 a.m. on Friday, October 11, 2019 at Kibler-Brady-Ruestman Memorial Home in Bloomington with Pastor Rick Wagner officiating. A visitation will be held one hour prior to the service at the memorial home.

Inurnment will be at Park Hill Cemetery in Bloomington. Memorials may be made to The Baby Fold in Normal

Ralph was born on November 5, 1935 in Bloomington a son to Ralph and Esther Hogberg Olson. He married Delores Louise Jordan in 1956. He later married Jean Zimmerman in 1991. They both preceded him in death.

Ralph worked in the family cleaning business Broleen Cleaning Plant, later renamed Olson Cleaners in Bloomington. He attended Illinois Wesleyan University in Bloomington. Following his college career he was an advertising finish artist for Biddle Advertising, later he became a freelance photographer and managed the photography lab at Eureka Williams Company both in Bloomington. After Ralph retired he worked part-time at Camera Corner in Bloomington for many years.

He enjoyed fishing, his motorcycle, and his many cameras.

Ralph was a loving father, grandfather, and brother. He will be greatly missed by all who knew him.


To send flowers to the family or plant a tree in memory of Ralph 'Bud' G. Olson, please visit our floral store.

Please click here to view the video tribute
To send flowers to the family in memory of Ralph Olson, please visit our flower store.