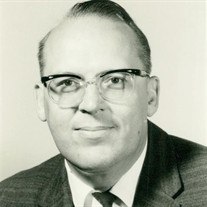 His funeral service will be at 10:00 a.m. on Monday, February 6, 2017 at College Avenue Baptist Church in Normal with Rev. Dr. Clark Killingsworth officiating. Visitation will be from 4:00-6:00 p.m. on Sunday, February 5, 2017 at the church. Military Rites will be accorded by Bloomington-Normal American Legion Honor Guard.

Interment will be at East Lawn Memorial Gardens in Bloomington. Memorials may be made to College Avenue Baptist Church Building Fund, 1320 E. College Ave, Normal, IL 61761.

Ray was born on July 21, 1926 in Lawrenceville, Illinois a son to Charles Raymond and Marjory Sturgeon Belcher.

He was preceded in death by his parents and an infant daughter.

After graduating from Lawrenceville High School in 1944 he enlisted in the Navy. Ray served two years, most of it in the Western Pacific. He earned a battle star off Okinawa and was on the first American ship to go into Japan at the war's end. Ray went on a World War II honor flight to Washington, D.C. which he enjoyed very much.

Ray pastored three churches before accepting a position in Unit 5 teaching sixth grade at Eugene Field School. After four years he went to Chiddix Junior High School where he taught Social Studies for 20 years. While at Chiddix he kept the score book for most of the home basketball games for boys and girls.

Shortly after retiring from Unit 5 Ray became a court room clerk at the Law and Justice Center most of the time for Judge Elizabeth Robb until December 2008.

Ray was a charter member of College Avenue Baptist Church and participated in all its activities as long as he was physically able. He served as a deacon, Sunday School teacher, on the pastor search committee, building committee, and others. He was a member of American Legion 635, and an election judge for many years.

He enjoyed reading John Grisham's books as well as books and magazines about the Civil War and World War II. He attended the Wednesday 6:30 a.m. Bible Study at Immanuel Bible Foundation until it ended in 2012. He kept a diary beginning January 1, 1973, his last entry was November 16, 2016.


To send flowers to the family or plant a tree in memory of Raymond "Ray" E. Belcher, please visit our floral store.

Please click here to view the video tribute
To send flowers to the family in memory of Raymond Belcher, please visit our flower store.