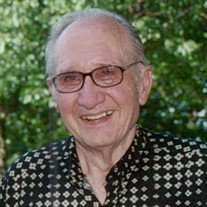 His funeral service will be at 10:00 a.m. on Monday, January 16, 2017 at Trinity Lutheran Church in Bloomington with Pastor Thomas Wirsing officiating. Visitation will be from 4:00-7:00 p.m. on Sunday and one hour prior to the service both at the church. Kibler-Brady-Ruestman Memorial Home in Bloomington is assisting the family with arrangements.

Interment will be at Park Hill Cemetery in Bloomington. Memorials may be made to Trinity Lutheran School Scholarship Fund, 1102 West Hamilton Road, Bloomington, IL 61704.

Ray attended Trinity Lutheran Grade School and graduated from Bloomington High School. He graduated from Washington University in St. Louis with a Bachelor of Science in Retailing in 1951 and was a member of the Pi Kappa Alpha Fraternity.

He served as a Corporal in the United States Army from July 1951 to July 1953, earning the Korean Service Medal, the United Nations Service Medal and the Occupation Medal (Japan) before returning to St. Louis to work for Famous-Barr Department Store.

Ray joined the family business, Casey's Market Basket, founded by his father-in-law, Elden Casebeer, in 1963, before transforming it with his wife into Casey's Garden Shop and becoming a second-generation owner in 1973. He worked every day until he was 85 years old and could be frequently seen wearing his white apron, carrying a grease pencil, and checking people out at the cash register.

He was a lifelong member of Trinity Lutheran Church and served on Board of Elders and Board of Christian Day School.

Ray was a loving husband, father, grandfather and friend and will be greatly missed.


To send flowers to the family or plant a tree in memory of Raymond 'Ray' Claire Lartz, Jr., please visit our floral store.

To send flowers to the family in memory of Raymond Lartz, Jr., please visit our flower store.