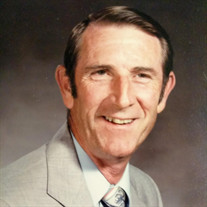 His funeral service will be held at 10:00 a.m. on Friday, March 2, 2018 at Kibler-Brady-Ruestman Memorial Home in Bloomington with Pastor T.D. Brewer officiating. Visitation will be from 6:00-9:00 p.m. on Thursday at the memorial home.

Entombment will be at Park Hill Mausoleum in Bloomington. Memorials may be directed to the Pine Ridge Indian Reservation in South Dakota.

Richard was born on December 8, 1928 in Champaign, a son to George Bennett and Ruth Brodman Ferree. He married A. Joyce Peterson in June of 1954 in Normal. She survives.

He was preceded in death by his parents, a daughter-in-law, Susan Kahn M.D., and a son-in-law, Paul M. Crutcher.

He proudly served in the United States Army during the Korean War.

Richard taught at Normal Community High School, starting in 1953, and retiring as the Unit 5 Science Department Head in 1984. While at NCHS, he taught Physics, Biology, and Chemistry and also coached Sophomore Football and Boy's Golf.

After retirement, Richard spent his free time golfing and studying American history. He was a member of the Koronis Hills Senior Men's Golf League and the Mackle Park Senior Men's Tennis League.


To send flowers to the family or plant a tree in memory of Richard B. Ferree, please visit our floral store.

To send flowers to the family in memory of Richard Ferree, please visit our flower store.