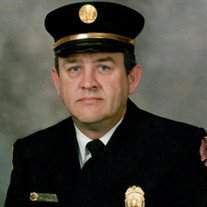 His Funeral Mass will be held at 10:00 a.m. on Wednesday, December 27, 2017 at Holy Trinity Catholic Church in Bloomington with Fr. Jeffrey Stirniman officiating. Military Rites will be accorded by the Bloomington-Normal American Legion Honor Guard. Visitation will be from 4:00-6:00 p.m. on Tuesday, December 26, 2017 at Kibler-Brady-Ruestman Memorial Home in Bloomington.

Interment will be at later date at Evergreen Cemetery in Bloomington. Memorials may be made to Central Catholic High School or to the Donor's Choice.

David was born August 30, 1942, a son to Richard Charles and Betty Virginia Arnold Fox. He married Carol Lynn Keeran on May 11, 1963 at St. Mary's Catholic Church in Bloomington.

David was born and raised in Bloomington and was a graduate of Trinity High School Class of 1960. After high school he joined the Illinois National Guard, serving from 1960-1964. He later joined the Bloomington Fire Department in 1970, where he served for 24 years before his retirement. It was also during these years where David became a barber and cut hair for many customers in the Griesheim Building in Downtown Bloomington.

He also worked for State Farm Insurance in Administrative Services on his day's off from the Fire Department. David was a long time member of the Bloomington Knights of Columbus Council #574 and Holy Trinity Catholic Church in Bloomington. He enjoyed his profession of serving and protecting the citizens of Bloomington as a Fireman and all those he served with. David enjoyed his other jobs and the many good friends whom he worked with and cared for.

David's greatest love was his wife, Lynn, his children, and his grandchildren and the many years he devoted to all of them and supporting them in so many ways. He will be dearly missed by all who knew him.


To send flowers to the family or plant a tree in memory of Richard David Fox, please visit our floral store.

Please click here to view the video tribute
To send flowers to the family in memory of Richard Fox, please visit our flower store.