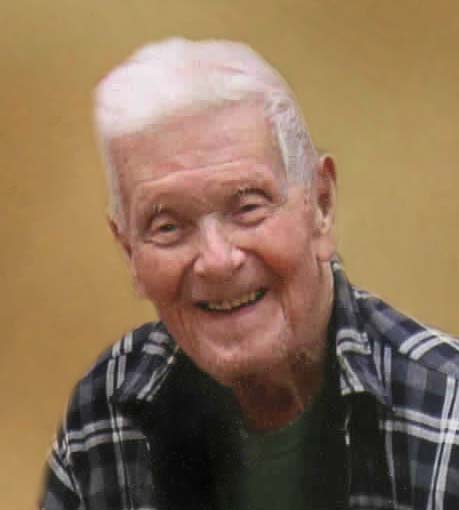 Bloomington – Richard Earle “Dick” Wiley passed away peacefully on Saturday, February 19, 2022 at Luther Oaks in Bloomington where he had been a resident since 2019. He was 96-and-a-half.

Dick is survived by his son, Victor (Ruth) Wiley of Bloomington; grandchildren, Daniel Wiley of LeRoy and Katherine (Philipp) Wagner of Weiden, Bavaria, Germany; and sister, Barbara McClymonds of Prescott, Arizona. He was preceded in death by his wife, parents, and brother, Bruce Wiley.

Following high school, he attended Wesleyan University, Iowa State, and Drake University. He worked for U.S. Rubber in Connecticut, USI Chemicals in Tuscola, Abbott Laboratories in North Chicago, and Hollister in Libertyville. He was a materials engineer, working with plastics for medical use. He rose to the level of senior scientist in Research and Development.

In 1987, Dick and Jimmie moved to Carlock to be close to family after retiring. They had both volunteered at the Carlock Public Library. They had been active members of the Corn Belt Stamp Club. Dick enjoyed sudokus, crossword puzzles, and Jeopardy! He also loved to read, amassing an extensive library of books on just about everything under the sun. Dick also loved music. He loved listening to music and singing and played oboe in his early years. He combined his love of music and stamp collecting, putting together audio-visual programs about music on stamps.

A private family service will be held later in the spring. Any memorial donations may be made to Luther Oaks or Sugar Creek Alzheimer’s Special Care Center.

He will be greatly missed.

To send flowers to the family or plant a tree in memory of Richard Earle "Dick" Wiley, please visit our floral store.

To send flowers to the family in memory of Richard Wiley, please visit our flower store.
Send a Sympathy Card