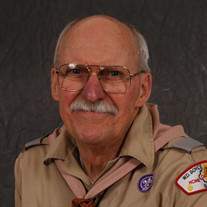 He married Gail Ann Chelmo in Webster WI on March 31, 1962. She survives along with their son, David (Jen), Reno, NV and daughter Sarah (Terry) Martin, Troy, MO. He is also survived by four grandchildren: Austin and Emily Martin, MO, and Julia and Samuel Briggs, NV, and sister, Frances (William) Cross, Emden. He was preceded in death by an infant son.

Bob grew up in Emden, served in the Army, was educated at ISNU, U of I, Champaign and received his PhD in genetics at the University of Minnesota. His post-doctoral work was at Brookhaven National Lab (AEC), Long Island, NY. In 1969 Bob moved his family to IL where he began a 22-year career at Funk Seeds in Bloomington, and then 14 years at Crow's Hybrid Corn Co in Milford. He retired in 2006. During his years in plant breeding Bob's research led to the development of a number of corn hybrids.

An important part of Bob's life was his involvement in Scouting which spanned more than 45 years at the local, district and council levels. He enjoyed mentoring both youth and adult Scouters and watching their leadership develop. He was proud when David and Austin became Eagle Scouts.

Bob enjoyed photography. He shared his skills with Sarah and was proud of her 'Kodak' success in 4-H. He loved following all four grandchildren' activities in soccer, snowboarding, skiing, swimming and school.

'A life well lived'. Bob will be missed by family and his many friends. A celebration of life is planned for mid-July due to COVID-19. He was a member of First United Methodist Church in Normal. Kibler-Brady-Ruestman Memorial Home in Bloomington is assisting with arrangements.

The family appreciates the support of OSF Hospice staff during the last days of life. The family suggests memorials be made in Bob's name to the Alzheimer's Association (207 S Prospect, Ste #1, Bloomington, 61704), BSA Troop 19 (% Ian King, 707 Watford Dr, Bloomington, 61704) or to an organization of the donor's choice.

To send flowers to the family or plant a tree in memory of Robert "Bob" W. Briggs, please visit our floral store.

To send flowers to the family in memory of Robert Briggs, please visit our flower store.