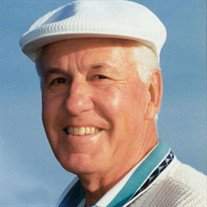 Bloomington - Robert ‘Bob' Harold Fedden, 86, of Bloomington passed away peacefully at 1:35 a.m. on Friday, July 28, 2017 at Advocate BroMenn Medical Center in Normal surrounded by family and loved ones.

His funeral service will be held at 2:00 p.m. on Tuesday, August 1, 2017 at Kibler-Brady-Ruestman Memorial Home in Bloomington with Pastor Billy Newell officiating. Visitation will be from 12:00-2:00 p.m. prior to the service at the memorial home.
A private interment will be in Hudson Township Cemetery in Hudson. Memorials may be made to a charity of the donor's choice.
Bob was born on January 15, 1931 in Laurelton, New York, a son to John and Catherine Neger Fedden. He married Carole Lenore Preston on May 2, 1954 in St. Albans, New York.
Surviving is his wife, Carole Fedden of Bloomington; son, Alan Robert (Sandra Ann) Fedden of Hudson; daughter, Lyn Carol Fedden of Hudson; two granddaughters, Katie Nicole (Ethan) Glasford of Aberdeen, SD and Elizabeth Suzanne Fedden of Seattle, WA; two great granddaughters, Addalyn Nicole and Emily Louise Glasford, both of Aberdeen, SD; and brother, Richard (Joanne) Fedden of Kingman, AZ and several cousins.
He was preceded in death by his parents.
Bob graduated from Andrew Jackson High School in St. Albans, NY in 1949. In 1951, he enlisted in the United States Navy and served abroad the USS Mistcher DL2 where he attained the rank of Pipe Fitter Second Class (PF2). During his Navy service, he attended the Salvage Diving School in Bayonne, NY and received a Second Class Diver designation. Bob left the Navy in 1955 with an honorable discharge.
He served as a police officer in Darien, CT and Santa Ana, CA in 1957 when the family moved to Southern California. Bob attained the rank of Detective Sergeant while serving with the Santa Ana Police Department. While on the SAPD, he went to night school at Long Beach State College and graduated in 1964 with a Bachelor's Degree in Criminal Justice.
Bob left the SAPD in 1964 and started work with State Farm Insurance Company as a Claims Adjuster in the Auto Claims Office in Montebello, CA. In 1965, while working at State Farm, Bob continued his education attending Pepperdine University and received a Juris Doctor (Law) Degree in 1971. He passed the California State Bar Exam shortly thereafter and continued working at State Farm. In 1978, Bob was transferred to State Farm's Corporate Office in Bloomington, IL where he worked as lead counsel in the Health Claims Department. He retired from State Farm in 1993 and he and Carole moved to Rio Verde, AZ. Bob and Carole lived in Arizona for about ten years before relocating to Morrisville, NC to be closer to their daughter, Lyn.
He was an avid golfer and enjoyed playing as often as possible. Bob enjoyed the outdoors and spending time with his granddaughters, Elizabeth and Katie, hiking and exploring the Arizona desert.


To send flowers to the family or plant a tree in memory of Robert 'Bob' Harold Fedden, please visit our floral store.

To send flowers to the family in memory of Robert Fedden, please visit our flower store.