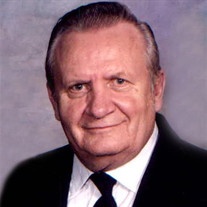 His funeral service will be Friday, July 7th at 10 a.m. at Trinity Lutheran Church in Bloomington with Pastor Thomas Wirsing officiating. Visitation will be one hour prior to the service at the church. Full Military Rites will be accorded by the Bloomington-Normal American Legion Honor Guard. Kibler-Brady-Ruestman Memorial Home in Bloomington is assisting the family with arrangements.

Interment will be at Park Hill Cemetery in Bloomington. Memorials may be made to Trinity Lutheran Church or School.

Bob was born on October 21, 1931 in Chicago, Illinois, a son of George A. and Margaret I. (Houmes) Thornton. He married Bonnie L. Meyer on April 11, 1954 at Trinity Lutheran Church in Bloomington.

He was preceded in death by his parents; and a brother, Wayne Thornton.

Bob graduated from Bloomington High School in 1951. He proudly served in the National Guard as a truck driver from 1949-1952. He then served in the United States Air Force with a rank of Airman First Class as an Air Force Police Officer from 1952-1961.

He was employed at Triangle Truck Parts for his father in the parts department from 1961-1962 and General Electric as a set up man from 1962-1967. He later worked and retired from GM&O - Illinois Central Gulf as a car inspector from April 1967-August 1986.

Bob enjoyed all children and animals, holidays, time in the yard, cooking, his Lincoln Town Cars, watching the Chicago Cubs, Chicago Bears, and NASCAR rooting for Jeff Gordon, and time spent with his family.

He was also very active in his church serving on Married League and as a Sunday School Coordinator. He also was active at Trinity Lutheran School while his daughters attended serving on the Athletic Committee. He could be seen at all of his children's and grandchildren's activities.
Bob was our hero and rock of our family. He was a loving husband, father, grandfather, brother, son, and uncle, he will be greatly missed by all.

The family would like to thank the girls in the ICU and Comfort Care at Graham Hospital for all there comfort and support during his final days. They would also like to thank Sally Diemer for all her, love, support and strength for the family during these difficult times.


To send flowers to the family or plant a tree in memory of Robert 'Bob' M. Thornton, please visit our floral store.

Please click here to view the video tribute
To send flowers to the family in memory of Robert Thornton, please visit our flower store.