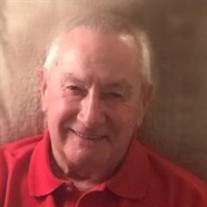 He was preceded in death by his parents and a sister, Bertha Hostick.

Bob worked for Springfield Electric Supply Company for 39 years in multiple capacities, culminating in his role as Senior Vice President & District Manager. He retired December 30, 2003 from a career he loved. Bob served as a trustee for the Bloomington Township Fire Department and on the board of the American Red Cross of the Heartland. He was an avid St. Louis Cardinal fan, enjoyed attending Illinois State Redbird basketball games, looked forward to deer and turkey hunting with his buddies and supported the community in a number of ways.

He proudly served his country from 1962-1964 in the United States Army.

Bob loved his family, especially spending time with his six grandchildren. He will be missed by all of those who knew him.

A celebration of life will be held at a later date. Kibler-Brady-Reustman Memorial Home in Bloomington is assisting the family with arrangements.

In lieu of flowers, memorial contributions may be made to the Community Cancer Center (Normal, IL), American Red Cross of the Heartland or to the Bloomington Township Fire Department.

To send flowers to the family or plant a tree in memory of Robert "Bob" L. Volk, please visit our floral store.

To send flowers to the family in memory of Robert Volk, please visit our flower store.