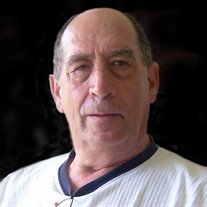 Rocco Tertius Badenhorst, 74, of Bloomington, Illinois, formerly of Pretoria, South Africa, passed on to his eternal home with the Lord, at 8:45 a.m. on Thursday, April 19, 2018 at his residence. His love for God, and caring family, supported him, even in his final fight with cancer.
Kibler-Brady-Ruestman Memorial Home in Bloomington performed the cremation and is assisting with the necessary arrangements, which was Rocco's desire. His "Celebration of Life Service," will be held on Saturday the 28th of April, 2018 at College Avenue Baptist Church, 1320 E. College Avenue, Normal, IL. Pastor Clark Killingsworth, will be officiating. Service begins 2:00p.m. visitation an hour before. Refreshments will be served following the service. In lieu of flowers, make donations to Integrity Ministries, 807 Summit Street, Bloomington, IL 61701
Rocco was born to Sylvia Ann du Preez and Christoffel "Knox" Lombard Badenhorst on the 20th November, 1943, being the youngest of six children. He was preceded in death by his parents, two sisters, Lydia Badenhorst, Sylvia Celeste Badenhorst, and brother, Esli Benjamin Badenhorst. His siblings, Hyacinth "Cynthia" Sonnenberg, and Christoffel Lucius "Pierre" Badenhorst, both of Pretoria, South Africa, surving him.
Rocco was blessed to have a loving family. He married his best friends, and love of his life, Darlene Arlotte Badenhorst (nee Booth), on the 20th March, 1965, in East London, South Africa. Claude Stevens, who was Darlene's pastor and uncle, officiated at the wedding. Attending were, all grandparents, many family members, and friends.
His family grew, and is surviving him: His wife Darlene Arlotte Badenhorst, born Booth, on the 25th November, 1942. His son, Leonard "Len" Esli Badenhorst, of Bloomington, Illinois; daughter, Charmaine Tertia Badenhorst, of Bloomington, Illinois; three grandchildren, Jacobus "Jac" Philippus Andre Bezuidenhout, of Cape Town, South Africa, Leonard Martin Vincent Badenhorst, and Kylie Shennetté Badenhorst, both of Bloomington, Illinois.
Rocco proudly served in the South African Air Force from 1963-1965. In later years he operated and owned a hardware store, until him and Darlene his wife trained for missions and ministry at Christ for The Nations Institute in Dallas, Texas during the late 70's.
He and his wife Darlene relocated to the States during 1987 where he furthered his studies in Theology while ministering in various places. He earned his PhD in Theology from Anchor Theological Seminary and Bible Institute, Texarkana, Arkansas.
His passion was for missions, volunteering to minister in Brazil, Chile, Zambia, and Nigeria since 2002 - 2014. His wife Darlene accompanied him on one of his mission trips to Brazil.
He and his wife founded "Integrity Ministries," (not affiliated with any other ministry by the same name}, during 1997. Part of that ministry is to distribute food to families, and individuals in need.
His energy, wit, and enthusiasm will be missed by many, especially by his family.
Till we meet again in our eternal home.


To send flowers to the family or plant a tree in memory of Rocco Tertius Badenhorst, please visit our floral store.

To send flowers to the family in memory of Rocco Badenhorst, please visit our flower store.
Send a Sympathy Card