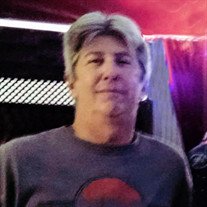 A Celebration of Life will be held at the American Hungarian Club in Bloomington led by Pastor Brent Salm on Saturday, November 16th at 1:00 p.m. Kibler-Brady-Ruestman Memorial Home is assisting the family with arrangements.

In lieu of flowers memorials can be made to the Community Cancer Center in Normal or the American Hungarian Club in Bloomington.

Roger was born on August 13, 1961 in Normal to Charles R. and Barbara J. Hull who preceded him in death. He was also preceded in death by a niece, Molly Hull.

Roger was a mechanic all of his life and worked at several locations in the Bloomington/Normal area. Most recently he was employed at Don Owen Tire in Bloomington.

Roger loved his family, and his many friends. He enjoyed NASCAR, fishing in the Current River, and the St. Louis Cardinals. Roger fought a hard fight and will be greatly missed.

To send flowers to the family or plant a tree in memory of Roger Lee Hull, please visit our floral store.

To send flowers to the family in memory of Roger Hull, please visit our flower store.
Send a Sympathy Card