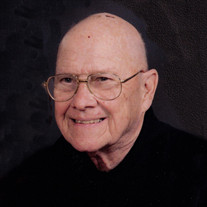 A visitation will be on Monday, October 7, 2019 from 5-7:00 p.m. at Kibler-Brady-Ruestman Memorial Home in Bloomington. In lieu of flowers, memorials may be directed to McLean County Animal Control in Bloomington.

Ross was born on July 8, 1929 in Moline, the son of Hippolithus Henry and Gertrude M. Smartsy Muench. He married Joan Brumbaugh on June 14, 1952 in Moline, Illinois. She proceeded him in death on November 3, 2017.

Ross proudly served in the United States Army beginning in 1953 and was a paratrooper.

Ross graduated from Illinois State Normal University with a Master's Degree in 1963. He began his career with Unit 5 school district in 1964, first as a teacher and then ending his career as principal of Sugar Creek Elementary in Normal.

He then began a career working at the Normal Police Station as a crossing guard and through his 20 years at the police station he held various jobs.

Survivors include his daughter, Kathy (Kevin) Scott and son, John Muench, both of Normal; grandsons, Steven (Ginny) Byers, of Normal and Benjamin Scott of Chicago and 2 great grandchildren, Ian and Mena Byers.

We would like to thank Transitions Hospice for the care given to Ross, and our very own angel, Alice Williams for all the wonderful care given to him.

To send flowers to the family or plant a tree in memory of Ross H. Muench, please visit our floral store.

To send flowers to the family in memory of Ross Muench, please visit our flower store.