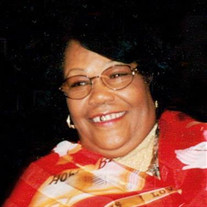 An angel, named Roxie Lee Johnson, was sent to earth on September 23, 1935 to Polly and Jesse Drummer Sr. in Waverly, Louisiana. She was the second eldest of seven children.
She grew up in the "big town" of Delhi, Louisiana (Population 2,879). Being the oldest girl of the family, she began perfecting her cooking and baking skills early on under the guidance of her mother Polly. She discovered her love for Jesus and accepted him as her Lord and savior at an early age.
While attending hair appointments with her mom, she met her childhood sweetheart, Richard Lee Johnson Sr. They eventually married on November 13, 1952 and relocated to Chicago, Illinois in of May 1955. It was here where they raised their six children together.
Roxie was a very hard worker. She worked as a silk presser for a dry cleaners for several years after moving to Chicago. In addition to that, she also was a beautician. However, her passion was her in home daycare that she ran for over 25 years. She provided loving care to a countless numbers of children.
Roxie and Richard provided their six children with a strong foundation in family love, faith in God and service to others. She lived by the motto: "If I can help someone along the way, then my living will not be in vain." Roxie gave her children roots to grow and wings to fly. She was always her children's biggest cheerleader and number one fan. Her biggest joys were her children, grandchildren and great grandchildren. Her beautiful smile could warm the coldest heart.
Roxie loved gardening and the neighbors always looked forward to seeing the flowers she planted each year. Roxie loved cooking and baking for family gatherings, as well as baking cakes for others for special occasions. She often said she didn't know how to cook for a few people, so there was always a feast prepared. Roxie always made sure her "grandbabies" had full bellies. Roxie was a sassy dresser and loved her church hats. Many people loved when she would greet them with "Hey Baby". Roxie was a woman of God and welcomed all into her home and her heart. She provided a legacy of love that will live on in all of our hearts forever.
At 11:45 p.m. on Friday, May 25, 2018, God called Roxie home to rest and to receive her crown of glory.
She leaves to cherish her precious memories: her husband of 65 years, Richard Sr.; two daughters: Polly (LaPatrick), Latricia (Rian); three sons: Richard Jr. (Loretta), Ellis (Davette), Kenny (Melissa) and son-in law, Cedric Carter. 18 grandchildren, 14 great-grandchildren, 1 great-great grandchild; two sisters: Flora (Bill), Eva (Horace); two brothers: Jesse Drummer Jr, (Gene) and Jimmy; sister in law, Gaynell Drummer; Heritage Health El Paso family; and a host of in-laws, nieces, nephews, and other relatives and friends.
She is reunited in glory with her daughter, Jessie Carter, brothers, Elba Drummer and Lonzo Drummer, and her parents, Jesse and Polly Drummer.
Memorial donations can be made in memory of Roxie to Heritage Health El Paso, 555 E. Clay Street El Paso, Illinois 61738.


To send flowers to the family or plant a tree in memory of Roxie L. Johnson, please visit our floral store.

Please click here to view the video tribute
To send flowers to the family in memory of Roxie Johnson, please visit our flower store.