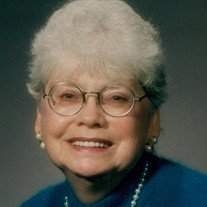 Her memorial service will be at 4:00 p.m. on Friday, December 9, 2016 at Kibler-Brady-Ruestman Memorial Home in Bloomington with Pastor Terry Strom officiating. Visitation will be one hour prior to the service at the memorial home.

Ruth made a generous donation of her body to science and will eventually be interred with her mother at Evergreen Memorial Cemetery.

Memorials may be made to LeRoy Fire Department and Ambulance.

Ruth was born on May 18, 1926 in Heyworth a daughter to Arthur H. and Caroline Schroeder. She married Allen J. (AJ) Gibson in California and later William (Bill) Pierce in Bloomington.

She was preceded in death by her parents and siblings, Arthur Kenneth, Mildred L. Weed, John E. (Jack) and Robert W. As well as both former husbands.

Ruth moved to the state of California as a young child due to health reasons. She graduated from Benjamin Franklin High School in Los Angeles, CA in 1945. She returned to Bloomington and lived in Heyworth during her marriage to Bill Pierce and later moved to LeRoy. Ruth moved to assisted living in the Blair House and later to the McLean County Nursing Home upon her diagnosis of Dementia.

She enjoyed a long career at State Farm Insurance, retiring after 42 years of service. The majority of those years were spent in the Life Company. Ruth considered State Farm to be a second family.

Ruth worked several part time jobs including Owens IGA and Landmark Galley, both in LeRoy and as a greeting card merchandiser. She also volunteered for many years at the Prairie Aviation Museum.

She was an avid Chicago Cubs fan and a proud Republican. Ruth loved to shop and was always looking for just the right gift.

Special thanks to the staff at the McLean County Nursing Home for their care.


To send flowers to the family or plant a tree in memory of Ruth Carolyn Pierce, please visit our floral store.

To send flowers to the family in memory of Ruth Pierce, please visit our flower store.