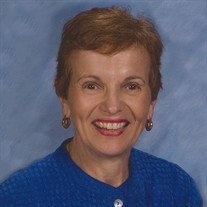 Bloomington - Ruth M. Weber, 80, of Bloomington passed away at 7:40 a.m. on Friday, September 8, 2017 at Bickford House in Bloomington.
Her Mass of Christian Burial will be at 10:00 a.m. on Friday, September 15, 2017 at Holy Trinity Catholic Church in Bloomington with Fr. Geoff Horton officiating. There will be no visitation and a celebration of Ruth's life will follow Mass at the church. Her special friend Dan Brady and Kibler-Brady-Ruestman Memorial Home in Bloomington are assisting with arrangements.
Inurment will be in Wildwood Cemetery in Sheboygan, Wisconsin at a later date. Memorials may be made to Holy Trinity Church or the Pratt Music Foundation.
Ruth was born on August 7, 1937 in Manitowoc, Wisconsin, the daughter of William and Marie Weber. She had one brother, William Weber.
She grew up in Manitowoc, WI and graduated from Lincoln High School also in Manitowoc, WI. Ruth received her Bachelors Degree from Lawrence University in Appleton, WI. Ruth remained an avid Green Bay Packer fan her entire life.
Later in life, Ruth moved to the Bloomington Normal community where she worked in sales selling women's cosmetics to department stores and clients. She became an active member of Holy Trinity Catholic Church in Bloomington where she played the organ for mass and various events at the church. She also played the organ for many years at horse shows for county fairs and was a regular organist for horse shows at the Illinois State Fair and showed and loved horses.
Ruth was very active in Republican politics where she was a former president of the McLean County Lincoln Club and was elected Precinct Committee Woman in Normal for many years. She attended several national and state Republican Conventions. She ran for and was elected McLean County Recorder in 1992, and served as County Recorder for several terms, retiring in 2004.
Ruth improved the Office of Recorder by developing and utilizing many innovative updates of data, scanning and imaging equipment, and improving the quality of service to the citizens of McLean County. Ruth served as President of the Friday Club in McLean County Government where elected officials in McLean County Government would meet over lunch on Fridays to share ideas and discuss current events in McLean County Government.
Ruth was patient, kind and considerate to others. She was grateful to all who helped her in her later years, including her special friends Ann Ripsom, Pat Pence, Irene and Dennis Bourgerie, and Dan Deneen and his family. Ruth's caregivers are especially appreciative of the kind staff at Bickford House and OSF Hospice for their assistance. Ruth was loved by all who knew her, and her smile and gentle ways will be dearly missed.


To send flowers to the family or plant a tree in memory of Ruth M. Weber, please visit our floral store.

To send flowers to the family in memory of Ruth Weber, please visit our flower store.