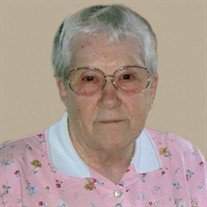 Ruth was born on April 14, 1921 in Le Roy, Illinois, a daughter to Moss and Neva Hendren Riggs. Her father passed away when she was 10 months old. Her mother married her stepfather, Roy Schifflett. She married Oscar Williamson on March 29, 1943 in St. Louis, Missouri. He preceded her in death on March 17, 1989.

She was preceded in death by her parents; two sisters, Mary (David) Totten and Juanita (Verdon) Cox; several step brothers and sisters.

In memory of Ruth, please do a kind deed for someone in need as Ruth did most of her life.


To send flowers to the family or plant a tree in memory of Ruth A. Williamson, please visit our floral store.

To send flowers to the family in memory of Ruth Williamson, please visit our flower store.