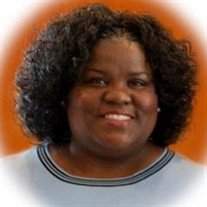 Sharon Denise Marks of Bloomington, IL transitioned to be with the Lord on Friday, November 16, 2018 at the age of 56.

Sharon was born on May 16, 1962 in Rockford, IL the fourth daughter to George L. and Ruthie Rideout, Sr.

Sharon gave her life to the Lord at an early age and remained faithful and active in His service. She leaned on the Lord throughout her life and was a living testimony of His grace and favor. Sharon was blessed with many gifts, one of which was singing. The gift of singing started at a young age in her father's church, Tabernacle Church of God in Christ, Rockford, IL. She had a beautiful voice and was passionate about praise and worship. In her early years, she and her siblings often ministered in churches in and around Rockford, IL. Sharon's passion for singing later lead her to serve as a member of the choir at Holy Redeemer Institutional Church of God in Christ, Milwaukee, WI for many years.

After relocating to Bloomington, IL, Sharon became an active member at Center for Hope Ministries. Her love for people and cooking lead her to serve as a member of the Hospitality Team at the church. Sharon's contributions to the Hospitality Team lead to many positive changes that will be remembered.

Sharon was a loving mother, grandmother, daughter, sister, niece, aunt, cousin and friend. She will be greatly missed by all who knew and loved her.


To send flowers to the family or plant a tree in memory of Sharon Denise Marks, please visit our floral store.

To send flowers to the family in memory of Sharon Marks, please visit our flower store.