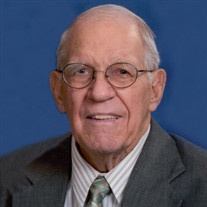 His funeral service will be at 11:00 a.m. on Friday, March 23, 2018 at Christ Lutheran Church in Normal with Pastor Jonathan Huehn and Pastor Timothy Fitzner officiating. Visitation will be one hour prior to the service at the church. Kibler-Brady-Ruestman Memorial Home in Bloomington is assisting the family with arrangements.

Entombment will be in Park Hill Mausoleum in Bloomington with full military rites by the Bloomington-Normal American Legion Honor Guard. In lieu of flowers, memorials may be directed to Wounded Warriors Project, The American Parkinson Disease Association or a donation to Christ Lutheran Church.

He was preceded in death by his parents; brother, Evan; sister, Elanore; son, Eric Peck; and son-in-law, Kevin Hayes.

Sherman graduated from Wethersfield High School in 1948 and attended Northern Illinois University. He proudly served in the United States Navy from 1950-1954 as an Aviation Electronic's Technician Third Class. He worked for Admiral, GE, Shell, Eureka and Illinois State University.

Sherman was a member of Christ Lutheran Church for 58 years where he served as an Elder, a Trustee and was on their planning committee. He was also a member for 53 years and past commander of American Legion Post 635.

He participated in several bowling leagues over the years, packaged Lutheran Newspapers, volunteered at the Normal Theater, BroMenn Hospital and the Bloomington Normal Air Show. He was an avid reader and coin collector. His favorite sports teams were the Chicago White Sox, Chicago Bears and Blackhawks. Sherman also enjoyed following the ISU Redbirds in both football and basketball.

Sherman and Trudy enjoyed going on cruises, guided tours and day trips together. He will be remembered for his beautiful framework he created for ISU and his family and friends.

Sherman was a loving father of four children (P)amela (E)ric (C)athy and (K)yle that uniquely spelled out the Peck family name.


To send flowers to the family or plant a tree in memory of Sherman E. Peck, please visit our floral store.

To send flowers to the family in memory of Sherman Peck, please visit our flower store.