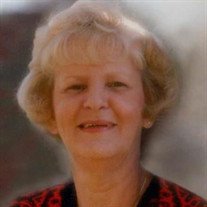 Private family services will be held. Kibler-Brady-Ruestman Memorial Home in Bloomington is assisting the family with arrangements. Memorials may be given to Children's Heart Foundation.

Shirley was born on October 15, 1936, in Creve Coeur, a daughter to Robert and Bessie (Wamsley) Carlton.

She was preceded in death by her husband, James Gaisford, her parents, two sisters, and three brothers.

Shirley owned and operated McLean Studio for many years with her husband where they took pictures for school, homecomings, and proms. She also worked for her son-in-law, Dr. Larry Nord, for many years at his orthopedic office. Shirley was also a volunteer for OSF Eastland serving in assisting with patients.

Her greatest joys in life were traveling, watching her children and grandchildren participate in sports, and spending time with her family.

To send flowers to the family or plant a tree in memory of Shirley Gaisford, please visit our floral store.

To send flowers to the family in memory of Shirley Gaisford, please visit our flower store.
Send a Sympathy Card