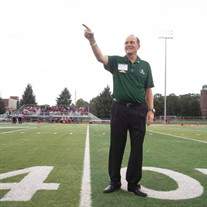 Steve died peacefully in his sleep on December 3, 2018 while on a medical mission trip to his beloved Haiti.

He was born in Fairbury, Illinois in 1957 and grew up a good ‘ole Midwestern boy in a loving home with his parents - Bob and Phyliss - and sisters - Sandy and Lynne. He was a devoted son and brother from the day he was born.

After earning the nickname "Dinky" in elementary school, he showcased his signature hardworking attitude by making it on the varsity baseball, basketball, and football teams at University High School.

At U-High, he met and started dating Joy Wainscott. They began a partnership that would lead to nearly 40 years of marriage and unparalleled commitment and love.

Steve attended Illinois Wesleyan University for his undergraduate degree, where he studied biology and formed lifelong bonds with his friends and fraternity brothers. His time at IWU impacted him greatly, and he remained committed to supporting the University for the rest of his life.

Steve and Joy married in 1979 and moved to Alton, IL, where he attended dental school at SIU School of Dental Medicine. They studied, worked, ate mac and cheese with tuna, and adopted cats. They moved to Chicago for Steve's oral surgery residency program at Cook County Hospital and planned to have a family of five boys - enough for a basketball team.

Instead, they had three girls, who they briefly moved to West Virginia and eventually brought back to their hometown of Bloomington-Normal to raise. Steve set up his own oral surgery practice in Bloomington, which thrives to this day.

Steve, Joy, and the girls moved out to an old farm house in Towanda and filled it with dogs, dolls, dental equipment, music, and love. Steve planted his own mini-forest of trees, many of which became family Christmas trees. He taught his girls to play basketball, soccer, softball, and even volleyball in the yard. He marched around the house to classical music and gathered the family "to have some toast" whenever there was something to celebrate.

Steve and Joy moved back to Normal in 2016, allowing Steve to walk to IWU games and decorate their fence facing the Constitution Trail with year-round plastic snowmen. No matter where they lived, Steve and Joy created a welcoming home for all. Their homes brought in many loved ones, some who would become family, including Andrew, son-in-law and fellow Cubs fan; Javonni, soon-to-be son-in-law. This sense of belonging followed Steve wherever he went and included family and friends from around the world.

From the moment Steve started his oral surgery practice, he gave back to the community. If you lived in Central Illinois - or could travel there - and needed oral surgery care, you would receive it through his practice. Steve institutionalized his generous spirit by starting free oral surgery clinics in Bloomington-Normal, which served thousands of patients over the years.

In 2013, Steve went on his first medical mission trip to Haiti to provide free oral surgery care. Serving Haitian communities immediately became Steve's life passion. His dedication and care will be felt in the communities he served for decades to come.

Steve spent his last years doing the things he loved most: attending horse races, cheering for the Cubs and Blackhawks, golfing, performing oral surgery in Central Illinois and Haiti, supporting his family, and goofing off with his cherished grandsons, Isaac and Oliver.

Steve had many roles in life - husband, father, grandfather, son, brother, uncle, and friend. He was a coach, a colleague, a leader, a mentor, a protector, a student, a teacher, a teammate, and a healer.

Steve was brave, kind, generous, energetic, hard-working, strong-willed, and passionate. He was a pillar of strength for his family and community.

Steve was a good man.

He leaves his kindness and strength with his wife, Joy; daughters, Molly, Flynn, and Anna; sons-in-law Andrew and Javonni; grandsons, Isaac and Oliver; mother, Phyliss; sisters, Sandy (Tim) and Lynne; many nephews and nieces; and countless family and friends. He is drinking Guinness and talking about horses with his father, Bob, while they watch over us all.

Donations in Steve's memory can be made to The Abundance Foundation Health Programs (http://www.abundance.org/donate) or the Center for Cornelia de Lange Syndrome at the Children's Hospital of Philadelphia (https://give.chop.edu/page/contribute/center-for-cornelia-de-lange-syndrome-and-related-diagnoses). Steve's family is hosting an Irish gathering befitting Steve's love of life on Sunday, December 16 from 2:00-5:00 pm at Memorial Center Illinois Wesleyan University, 104 E University, Bloomington; all are welcome to drink, dance, and share memories in Steve's honor.


To send flowers to the family or plant a tree in memory of Stephen "Steve" N. Doran, please visit our floral store.

To send flowers to the family in memory of Stephen Doran, please visit our flower store.