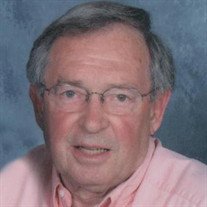 Downs - Terry Lynn Adreon, 79, of Downs, Illinois and Orlando, Florida, passed away at 7:00 a.m. on Tuesday, August 15, 2017 from complications related to Lewy Bodies Dementia.
His memorial service will be at 4:00 p.m. on Thursday, August 24, 2017 at Kibler-Brady-Ruestman Memorial Home in Bloomington with Pastor Gifty Smith officiating. Visitation will be from 2:00-4:00 p.m. prior to the service at the memorial home.
Inurnment will be in Pleasant Grove United Methodist Church Cemetery in Downs. Refreshments will be served in the church after the service. In lieu of flowers, memorials may be made to Humane Society of Central Illinois or Alzheimer's/Dementia Resource Center, 1506 Highland Dr., Orlando, FL 32803 or Cornerstone Hospice Foundation-Orange County, 2445 Lane Park Rd., Tavares, FL 32778.
Terry was born on March 25, 1938 in Bloomington, Illinois, a son to Milburn and Minervabel Mool Adreon. He married Suzanne Thomas on April 28, 1968 in Hudson, IL.
Surviving is his wife, Suzy Adreon of Downs; son, Lynn Thomas (Blythe Carpenter) Adreon of Orlando, FL; and two grandchildren, Chloe Lynn Adreon and Leyton Thomas Adreon.
He was preceded in death by his parents.
Terry graduated from Bloomington High School where he excelled in football and baseball, and from Southern Illinois University with a degree in physical education. He also proudly served in the Illinois Air National Guard based in Springfield, Il.
He was an insurance agent and partner with the CFPB insurance agency retiring in 2011. He was also the clerk for Old Town Township in McLean County for many years.
Terry was a member of the McLean County Antique Auto Club, Bloomington HOG Chapter, Antique Motorcycle Club of America, the Doodlebug Club, the Chief Blackhawk Motorcycle Club and Prairie Aviation Museum.
He enjoyed adventures riding with his "Bud 6" motorcycle buddies and continued to ride through out his life. Terry was most proud of his 1934 Harley Davidson given to him by his friend and mentor, Bob Davis, and competed with that bike in many antique motorcycle events around the United States.
Terry was a collector of "things" his whole life and certainly enjoyed sharing stories with the many people he met. He made a point to stay in touch with his classmates and friends in Bloomington. He did not know a stranger and was always ready to help whenever there was a need. Terry was loved by his family and friends and will be greatly missed.


To send flowers to the family or plant a tree in memory of Terry Lynn Adreon, please visit our floral store.

To send flowers to the family in memory of Terry Adreon, please visit our flower store.