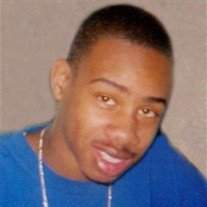 Terry was born on May 22, 1990 in Normal, Illinois, a son to Terry L. Williams and Kirchell Butcher.

Terry was a very curious, loving and caring young man; He grew up in Bloomington. He attended Unit 5 schools and graduated from Normal West High School where he played basketball. Terry was a member of Mt. Pisgah Baptist Church where he was born and raised, and baptized. He lately united with Eastview Christian Church.

During his life, Terry enjoyed playing basketball, video games, cooking and writing. He really loved spending time with his nieces and nephews and aunts and uncles whom he truly adored.


To send flowers to the family or plant a tree in memory of Terry D. Williams, please visit our floral store.

Please click here to view the video tribute
To send flowers to the family in memory of Terry Williams, please visit our flower store.