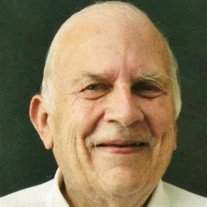 Tom was a professor emeritus of Politics and Government at Illinois State University, having retired in 1992 after 32 years on the faculty. He earned his B.S. from ISNU and his doctorate from the University of Illinois at Urbana. Tom established an ISU scholarship to help unpaid interns meet expenses after working with them for several years. He also served on the Friends of Milner Library board and was president of the group at one point.

Early in his teaching career, Tom was especially active in Bloomington/Normal community service work. He served on the first Economic Opportunity Council board, created a Directory of Community Services for low income residents, and raised money for a county-wide Head Start program before any federal funds were available.

His body has been donated to science and a celebration of life event will be held at a future date.

In lieu of flowers, the family requests that donations can be made to the Central Illinois or Bloomington Alzheimer's Society, the ISU Wilson Fund for Internships in Political Science, or to a charity of their choice. Messages of condolence and memories may be left at www.kiblerbradyruestman.com.

To send flowers to the family or plant a tree in memory of Thomas D. Wilson, please visit our floral store.

To send flowers to the family in memory of Thomas Wilson, please visit our flower store.