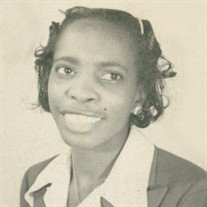 A private family graveside service will be held in Evergreen Memorial Cemetery in Bloomington. Memorials may be made to the American Cancer Society. Kibler-Brady-Ruestman Memorial Home in Bloomington is assisting the family with arrangements.

Tracie was born on August 30, 1924 in Canfield, Arkansas, a daughter to Sherrod and Angeline Sanders Grant. She married Grover Frierson on February 13, 1943 in Chicago. He preceded her in death April 1990.

She was preceded in death by her parents; and 20 siblings and half siblings.

Tracie worked in the fabric department at Goldblatt's Department Store in Chicago where she won the Nathan Award twice and later co-owned Queen City Cleaners in Chicago. She was a master seamstress and was very creative.

She was a loving wife, mother, and grandmother who enjoyed her grandchildren and was proud of her family.

To send flowers to the family or plant a tree in memory of Tracie L. Frierson, please visit our floral store.

To send flowers to the family in memory of Tracie Frierson, please visit our flower store.