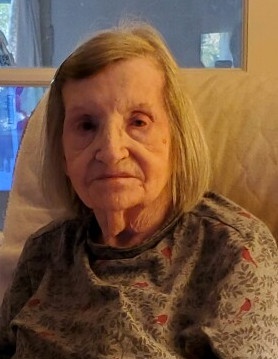 Velma Grant, 92, peacefully passed away in the early hours of June 5th, 2022 in her home in Bloomington.


The daughter of Blanche and Woodson Murrell, Velma was born on October 29, 1929, the day of the stock market crash that hurled the nation into the great depression. Velma arrived about 30 minutes before her twin sister Zelma, a fact she humorously held over her all her life. (As if a half hour older made her the mature one.)


Growing up in Arrowsmith with her five sisters and five brothers made for a full house with many hand-me-downs and shared housework, but also formed a strong bond of love that kept the family close all their lives. Velma married Dave Grant in September of 1949 and quickly started her family by having three sons in three years and a daughter eight years later. Early in the marriage, they lived with her mother-in-law, later in a small house in Bloomington. In 1957 they moved into the house her husband built in south Bloomington in which she would remain in for the next sixty-five years of her life.


When the children no longer needed constant attention, she took a job at the Eureka Williams plant and made it into a career that gave her financial independence following a 1975 divorce.


She remained active in her retirement years, keeping busy with whatever was needed from family and extended family. She thoroughly enjoyed her time with her house, yard, children, grandchildren, and great-grandchildren. (Not necessary in that order.)


She faithfully organized the Murrell family reunion, which ran some forty years until COVID halted them. As her physical mobility became limited, she continued to stay in touch by phone with all her family and friends. She would often share stories of her time as a child with the responsibility of raising rabbits and chickens, bringing in the cows and occasionally dealing with snakes on a small farm they once lived on. She would sadly retell about the auto crash in 1945 that took her father’s life and left her with a permanent scar on her forehead. Those were tough times for a single mother and eleven kids but they somehow made it all work.

Velma recalled stories from when she worked the graveyard shift as a switchboard operator in Arrowsmith. Her mother had to sign off on the jobs, as she was not yet 18. She remembered how her sisters and other friends would enjoy the movies, local fairs, and the roller rink in Bloomington. She remembered the sugar and coffee rationing during WW2 and remembered the ration book you carried to get a few gallons of gasoline a week. She remembered the paper drive, the rubber drives, the metal drives and the homemade clothes. It was a tough time for all families until the end of the war, but her family worked together and all came through it healthy and optimistic about the future nation.

Velma will remain forever in the hearts and minds of all who were lucky enough to have known her.

Her funeral service will be held at 2:00 p.m. on Thursday, June 9, 2022 at Kibler Brady Ruestman Memorial Home in Bloomington. Visitation will be held one hour prior to the service at the memorial home.

Interment will be at Park Hill Cemetery in Bloomington. In lieu of flowers, please donate to your favorite charity.

To send flowers to the family or plant a tree in memory of Velma Mae Grant, please visit our floral store.

To send flowers to the family in memory of Velma Grant, please visit our flower store.