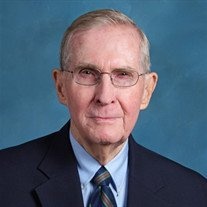 Vernon Paul Prenzler, 90, of Bloomington, passed away at 4:28 a.m., Sunday, March 10, at Advocate BroMenn Medical Center, Normal.
His funeral is scheduled for 10:00 a.m., Saturday, March 16 at Trinity Lutheran Church, with Pastor Billy Newell officiating. Visitation: 4:00 to 7:00 p.m, Friday, March 15 at Trinity Lutheran Church, 801 S. Madison St., Bloomington and one hour prior to the service.
Internment will be at Park Hill Cemetery, Bloomington. Memorials may be made to Trinity Lutheran Church Building Fund.
Vern was born in Bloomington on August 11, 1928, the son of Walter and Alma Gerling Prenzler. He married Ruth Urquhart on January 28, 1955 in Oconto, Wis. Vern and Ruth raised their three children in Bloomington until she died on May 6, 1974. He married Doris Petersen on July 4, 1983 in Fish Creek, Wis.
Surviving are his wife Doris Prenzler, Bloomington, sons Kurt (Rita), Edwardsville, and Erik (Terri) Bloomington, daughter Judy, Omaha, Neb., stepson David (Jan) Petersen, Naples, Fl. and stepdaughter Karen Erickson, Wheaton, and 10 grandchildren: Alexis, Anna, Christian, Edward, Roland, Ruth, Brenda, Jim, Elizabeth and Erik.
He was preceded in death by his parents, his wife Ruth and brother Lyle.
Vern attended Trinity Lutheran Grade School and graduated from Bloomington High School. He graduated from Illinois Wesleyan University in 1950 and was a member of Phi Gamma Delta fraternity. His love for the Bloomington- Normal community began at a young age, when he worked at the Miller Park peanut stand in grade school. During high school and college, he sold advertising for the school newspapers.
From 1950 to 1952 he served in the U.S. Army, stationed in Italy, Austria and Germany.
After his military service he graduated from a lumber dealer short course at the University of Washington. He was a manager and later owner of Corn Belt Lumber Co., where his father preceded him as manager. In 1958, Vern discovered his true passion, developing real estate. He developed his first residential subdivision (Brightview) in Normal. During his career he developed more than 2,000 residential lots and commercial developments, often with partners. Some of Vern's developments in the Bloomington-Normal community include North Park, Lincolnwood, Northgate, Northtown Industrial Park, Oakland Suburban Heights, Washington East, Pleasant Hills East & North, College Hills Plaza & Mall, College Hills South, Park Place, Parkshores, Lake Ridge, Old Farm Lakes and Wittenberg Woods. He named many streets in Bloomington and Normal.
Outside of his passion for business, Vern was active in his local community. In 1967, Vern worked with Harbor Hall and Tim Ives to prevent I-55 from being diverted to Peoria (the "Kerner Curve" plan), allowing for Bloomington-Normal to become a central transportation hub in Illinois. He loved to travel, especially to Europe, making friends everywhere he went and sharing stories and many photos of his adventures with family and friends.
Vern served on the Bloomington City Council from 1961 to 1965. He voted to sell the city electric plant and join Illinois Power, and to build Evergreen Lake, which became a second source of water for Bloomington. He was a member of the McLean County Board and served on the McLean County Republican Central Committee. He was a member of the Young Men's Club and was active with Bible Study Fellowship.
Vern was an active member of Trinity Lutheran Church and for many years, St. John's Lutheran Church.
Vern was a loving husband, father, grandfather and a lifelong and active member of the community.


To send flowers to the family or plant a tree in memory of Vernon P. Prenzler, please visit our floral store.

Please click here to view the video tribute
To send flowers to the family in memory of Vernon Prenzler, please visit our flower store.
Send a Sympathy Card