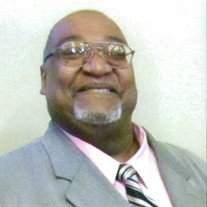 His funeral service will be at 10:00 a.m. on Saturday, September 22, 2018 at Union Missionary Baptist Church in Bloomington with Pastor U. D. Williams officiating. Visitation will be from 9-10:00 a.m. prior to his service at the church. Kibler-Brady-Ruestman Memorial Home in Bloomington is assisting the family with arrangements.

Interment will be in Evergreen Memorial Cemetery in Bloomington. Memorials may be directed to Union Missionary Baptist Church.

Minister Wesley, affectionately known as Wes, was born November 4, 1959 in Bloomington, Illinois a son to James and Rubie (Person) Caldwell.

Wes attended Bloomington High School and was a member of the musical group The Barbershoppers where he sang enthusiastically until graduating in 1977.

Wes was employed at Unit 5 Transportation, where he worked to assist families for over thirty years.

He was a devoted member of the Union Missionary Baptist Church where he served in many ministries; the Laymen department, the Praise Team, and the music department, as both a choir member and musician. Wes was blessed to achieve a lifelong dream when he was ordained as a Deacon in 2009. God wasn't through with him yet, on May 27, 2018 Wesley accepted the call, giving his first sermon and becoming a licensed minister.

Although called, Minister Wesley kept his down to earth personality, connecting with people from all walks of life. He loved God, people, singing, and video games, and could talk for hours about any one of those.

He is preceded in death by his father, James Caldwell, and two ex-wives, Azalea and Debbie.

Online condolences and memories of Wes may be shared with the family at kiblerbradyruestman.com.


To send flowers to the family or plant a tree in memory of Wesley Caldwell, please visit our floral store.

To send flowers to the family in memory of Wesley Caldwell, please visit our flower store.