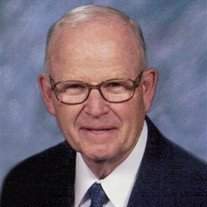 Bloomington - Wesley ‘Wes' D. Dunlap, 88, of Bloomington passed away at 2:20 a.m. on Monday, June 18, 2018 at Heritage Manor in Normal.
His funeral service will be at 11:00 a.m. on Saturday, June 30, 2018 at Second Presbyterian Church in Bloomington with Pastor Paul Stroup officiating. Visitation will be one hour prior to the service at the church.
Memorials may be made to Second Presbyterian Church or charity of the donor's choice. Kibler-Brady-Ruestman Memorial Home in Bloomington is assisting the family with arrangements.
Wes was born on September 16, 1929 in McIntosh, South Dakota, a son to Garner and Esther Larson Dunlap. He married Renee Anderson on June 8, 1957 in Minneapolis, Minnesota.
Surviving is his wife, Renee Dunlap of Bloomington; three children, Susan (Mark) Coyle, Steve (Renee) Dunlap and Brad (Carly) Dunlap and seven grandchildren.
He was preceded in death by his parents and a sister.
Wes was a United States Army Veteran serving his country in the Korean War.
He graduated from South Dakota State University in Brookings, with a Masters degree in agronomy. He moved to Bloomington in 1962 to work for Funk Brothers Seed Company. He later started his own business MICO, Inc.
Wes was a member of Bloomington Rotary Club, Second Presbyterian Church and Bloomington Country Club. His hobbies included golf, gardening and travel.
Wes was loved by his wife, Renee and all his family and friends who knew him.


To send flowers to the family or plant a tree in memory of Wesley 'Wes' D. Dunlap, please visit our floral store.

Please click here to view the video tribute
To send flowers to the family in memory of Wesley Dunlap, please visit our flower store.