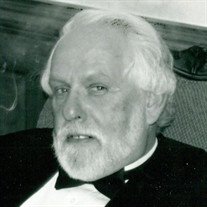 Bloomington - William Stephen ‘Bill' Kilmartin, 78, of Bloomington lost his battle with cancer on Sunday, December 10, 2017 at his home.

His Memorial Mass will be at 4:00 p.m. on Wednesday, December 27, 2017 at Historic St. Patrick Catholic Church in Bloomington with Fr. Jeffrey Stirniman officiating. Visitation will be from 2:00-4:00 p.m. prior to the mass at the church. Kibler-Brady-Ruestman Memorial Home in Bloomington is assisting the family with arrangements.

Memorials may be made to Historic St. Patrick Catholic Church.

He was preceded in death by his parents and siblings, Edward, Rosemary, John and Sherrilyn.

He graduated from Holy Trinity High School in 1957, then enlisted in the United States Navy. Bill was assigned to the Panama Canal Zone after completing Radio School, where he served until discharge in October 1960.

Bill worked at NICOR from 1960-2000 where he retired as a utility inspector. He enjoyed working with his hands and any project he completed was meticulous. He was a member of Knights of Columbus Council 574. He was an avid sports fan and loved to watch Notre Dame and Green Bay Packer football.


To send flowers to the family or plant a tree in memory of William 'Bill' Stephen Kilmartin, please visit our floral store.

To send flowers to the family in memory of William Kilmartin, please visit our flower store.