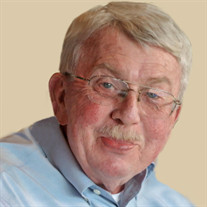 William B. Mullins, Sr., 75, of Bloomington, passed away at 6:03 p.m. on Tuesday, March 12, 2019 at his residence with his family by his side.
His funeral service will be at 11:00 a.m. on Monday, March 18, 2019 at First Baptist Church, 2502 E College, Bloomington officiated by Pastor Brian Hastings and Granddaughter, Outreach Pastor Lauren (Jacobs) Hegg. Visitation will be from 9-11:00 a.m. prior to services at the church with interment immediately following in East Lawn Cemetery in Bloomington.
William was born on October 22, 1943 in Berea, Kentucky, a son to Robert E. and Mary Elizabeth Showen Mullins. He married Mary Lynn Eisenberg on March 6, 1964 in Mount Vernon, Kentucky. Bill met his wife at Anglers Swim Club and just celebrated their 55th Wedding Anniversary last week.
In addition to his wife, he is survived by six children, Catherine (Charles) Arenson of Zionsville, Indiana, William B., Jr. (Jeanna) Mullins of Normal, Jennifer L. (Charles) Stuckey of Bloomington, Jim (Leslie) Mullins of Bloomington, John (Sara) Mullins of Milwaukee, WI and Thomas J. Mullins of Chicago, IL; nine grandchildren, Steven Mullins, Lauren Hegg, Joshua, Justin, Aaron and Sarah Jacobs and Jade, Avery and Cole Mullins; in laws, Ed Eisenberg, Mickey Julian and Mary Ann Mullins; and seven nieces and nephews.
He was preceded in death by his parents; brother, Robert Mullins; and sister, Martha Susan Mullins.
Bill moved to Bloomington at the age of 2. Growing up in Bloomington, he attended District 87 schools as a Wrestling Letterman. He graduated from Illinois Wesleyan University in Bloomington where he was a Phi Gamma Delta. Upon graduation, his first career was selling yearbooks and class rings. After an early retirement, he transitioned careers to open an American Family Insurance Agency, which he operated for 19 years. Throughout his entire career he was involved in a number of civic and fraternal organizations including PTA Boards and Committees at Brigham and Normal Community High School, he also served several terms as a Unit 5 School Board Member, a Trustee for Bloomington Township Fire Department and the McLean County Republican Party. He was a member of First Baptist Church in Bloomington, serving on the church board as well as many years as a youth leader.
Bill was a loving husband, father, grandfather and uncle. He treasured his family and enjoyed his friends.
Memorials may be directed to the Alzheimer's Association, Illinois Chapter, 225 N Michigan Ave, Floor 17, Chicago, 60601 or OSF Outpatient Palliative Care for Bloomington, 2265 W Altorfer Dr, Peoria, IL, 61615 or CCSI-Case Coordination Unit, 3601 General Electric Road, #2, Bloomington, 61704.


To send flowers to the family or plant a tree in memory of William B. Mullins, please visit our floral store.

To send flowers to the family in memory of William Mullins, please visit our flower store.
Send a Sympathy Card